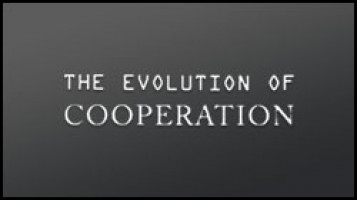 The Evolution of Cooperation

5.0/5 rating (1 votes)
Author: Robert Axelrod
Publisher: Basic Books; Revised edition (December 5, 2006)
ISBN-10: 0465005640
The prisoner's dilemma game (invented around 1950 by Merrill Flood and Melvin Dresher) takes its name from the following scenario: you and a criminal associate have been busted. Fortunately for you, most of the evidence was shredded, so you are facing only a year in prison. But the prosecutor wants to nail someone, so he offers you a deal: if you squeal on your associate – which will result in his getting a five year stretch – the prosecutor will see that six months is taken off of your sentence. Which sounds good, until you learn your associate is being offered the same deal – which would get you five years.

So what do you do? The best that you and your associate can do together is to not squeal: that is, to cooperate (with each other, not the prosecutor!) in a mutual bond of silence, and do your year. But wait: if your associate cooperates (that sucker!), can you do better by squealing ("defecting") to get that six month reduction? It's tempting, but then he's also tempted. And if you both squeal, oh, no, it's four and half years each. So perhaps you should cooperate – but wait, that's being a sucker yourself, as your associate will undoubtedly defect, and you won't even get the six months off. So what is the best strategy to minimize your incarceration (aside from going straight in the first place)?

To cooperate, or not cooperate? This simple question (and the implicit question of whether to trust, or not), expressed in an extremely simple game, is a crucial issue across a broad range of life.

Axelrod initially solicited strategies from other game theorists to compete in a computer tournament. Each strategy was paired with each other strategy for 200 iterations of a Prisoner's Dilemma game, and scored on the total points accumulated through the tournament. The winner was a very simple strategy submitted by Anatol Rapoport called "TIT FOR TAT" (TFT) that cooperates on the first move, and subsequently echoes (reciprocates) what the other player did on the previous move. The results of the first tournament were analyzed and published, and a second tournament held to see if anyone could find a better strategy. TIT FOR TAT won again.

Axelrod analyzed the results, and made some interesting discoveries about the nature of cooperation, which he describes in his book.

In summary, success correlates with the following characteristics: